The Khmer Rouge cuts through modern Cambodian poetry. Critics talk about pre-Khmer Rouge poetry: composed in a state of Edenic innocence with the reader never far from thoughts of the coming wrath, perhaps even wondering what fate befell those poets of the early 20th Century. Then there are the post-Khmer Rouge poets who wrote about those bloody years. Now, as the first peacetime generation comes of age, voices from the new Cambodia are making themselves heard. 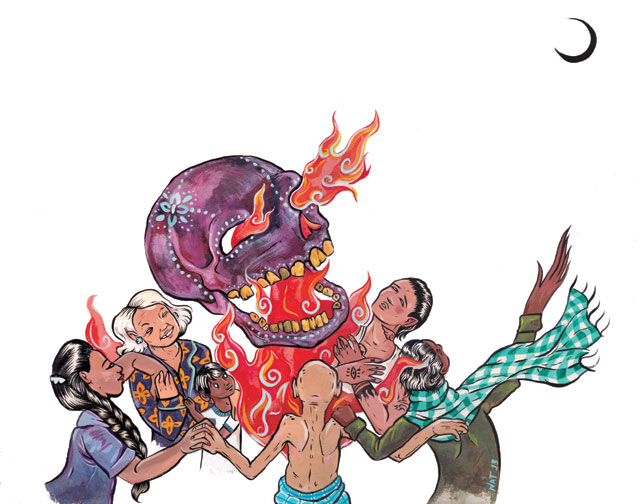 Kosal Khiev is a Khmer-American returnee and a respected spoken word poet. In the US, spoken word is influenced by the cadences of hip-hop and the political thunder of modern African-American poetry. In this untitled poem, Khiev takes his Khmer heritage and filters it through 100 years of US poetry. His poem is part of a thread that began with Walt Whitman in the 19th Century: a desire to throw open the constraints of poetry and let everything in – all subjects and all people. Khiev does this in a distinctly Khmer way, by inviting ancestors and his Khmer heritage into the “sacred space”. The ellipsis at the end of each line shows him reaching towards the ineffable, something beyond words. His use of the word “rouge” to describe the lips through which songs are sung is a poignant reference that is soon lost in the great human journey, full of “crying and laughing”.

Hang Borin, 26, is a poet whose voice reflects the united youth of Cambodia. His generation and those younger were not directly affected by the Khmer Rouge and are relating to their country as a developing democracy. The poem marches alongside Borin’s peers who joined the demonstrations demanding change from their government. The lines echo a strong desire for justice in a country that Borin sees as run by a corrupt cabal. To hope for dawn would be too much, so instead the poet looks for a new moon – a sign that, although things are dark, a new cycle is beginning.

I write from a sacred space held together by ancestors…

tethered in arms and elbows around a blazing pyre of flames

that flickers with shadows and figurines…

dancing and singing in tongues long forgotten to be spoken…

So hear the burst of timbers crackle

We laughed and cried…

We laughed and cried…

I touch the World,

And I see the Sea,

I walk along the Darkness,

The smell is bad,

So, I feel dizzy,

me, is life on Earth.

The noise of night,

there is a country,

and there is no Rule,

on the right of me is a new moon.

“My country and my people, I never understood” – The first part of a Southeast Asia Globe series that shines a light on the region’s finest poetry